Load posting via API (application programming interface) to integrated partner load sources such as 123Loadboard, DAT and NextLoad is convenient and popular in AscendTMS. An API is a set of programming code that enables data transmission between one software product and another. Software systems connected via API are likely developed utilizing different tools and methods. Because of this fact and sometimes human oversights, unsuccesful load postings and errors may occur from time-to-time. Until now, AscendTMS displayed, and whenever possible, indicated the underlying cause of load posting errors so that users could take actions to correct them. Despite this, some load posting errors when left unhandled would prevent the API from performing all of its functions. Today, we introduce a new way to quickly and easily clear unhandled load posting API errors and improve daily workflow.

Use the Clear Errors function when API errors occur and prevent loads from being removed from the Externally Posted Loads tab of Load Management.

*Note* Before clearing load posting errors, we strongly recommend reviewing the errors and attempting to resolve them. Errors typically result from incomplete load data such as missing pick and delivery dates, no equipment type selected or lack of load locations with zip codes. Other errors include load source authentication failure (incorrect username or password is being used), API has not been enabled from the integration partner, temporary internet outage or service outage. If load posting errors are not addressed, there is a good chance they will carry over into future load posting attempts.

*Note* Occasionally, API errors can occur during the unposting action. Clearing unposting errors from AscendTMS only results in clearing the load(s) from view within the Externally Posted Loads tab. Users should visit the affected load source partner's website or app directly to ensure loads are successfully unposted from them.

The action of clearing errors is very similar to load posting and unposting actions. In fact, you will conveniently find "Clear Errors" weblinks in the same place as your Post Loads and Unpost Loads links when you are on the Externally Posted Loads tab of Load Management.

To simply clear every posting error from every one of your posted loads, click the "Clear Errors" weblink above the Externally Posted Loads table. A modal window will pop up with a basic warning message. Read and understand the wanrnings, of course, but click the blue button with the eraser icon and your load posting errors will melt away.

It is also possible to specifically target posting errors for clearing by right-clicking or alt-clicking on a single posted load to bring up the load's Shortcut menu. 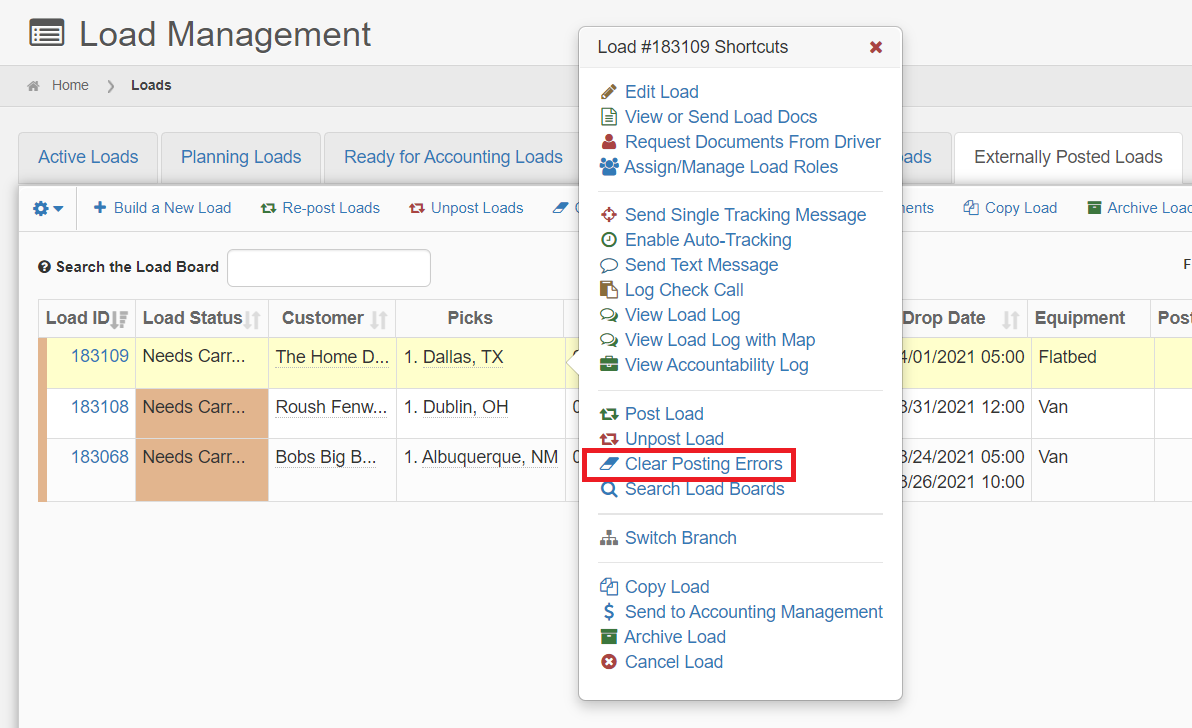 Load sources with posting errors will be represented by an eraser icon in the modal window. To bypass clearing an error for a particular load source, click or select the eraser icon and it will be replaced by a bypass icon (a horizontal line with arrows on both ends).

That's it! Enjoy the improved load posting and unposting workflow.

Choose files or drag and drop files
Was this article helpful?
Yes
No